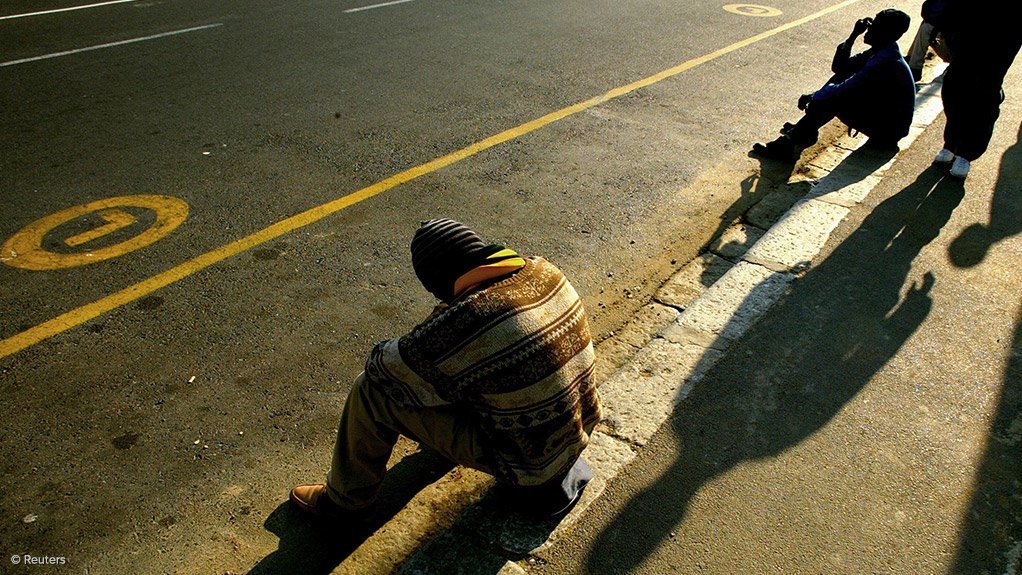 The South African population consists of about 59-million people.

The increase of persons in the labour force was offset by the working-age population increasing by 145 000 in the fourth quarter, while discouraged work-seekers increased by 62 000. Those who were not active in the labour market for reasons other than discouragement increased by 45 000.

The net increase in the number of persons who were not economically active in the fourth quarter was 107 000.

Maluleke explained that the expanded unemployment rate was 38.7%, or 10.4-million people, in the fourth quarter, which included discouraged work-seekers and those with other reasons for not searching for work.

The expanded unemployment rate increase was on the back of discouraged work-seekers increasing from 2.2-million people to 2.9-million people in the fourth quarter.

With this unemployment reading, professional services firm PricewaterhouseCoopers (PwC) said South Africa has the fourth-highest unemployment rate out of 182 countries tracked by Trading Economics, following Namibia, Bosnia and Herzegovina and Angola. This while the National Development Plan aimed for an unemployment rate of 14% by 2020.

Speaking after the release of the data, Steel and Engineering Industries Federation of Southern Africa Economist Marique Kruger said that while the slight decrease in the number of unemployed people was encouraging, it nevertheless had an insignificant dent in reducing the aggregate unemployment numbers, especially judging from the uninspiring unemployment rate.

“The nondescript aggregate unemployment is disconcerting as it has deeper socio- economic implications for the broader economy. The unemployment challenge is becoming very persistent and, together with increasing inequality  - captured by the Gini coefficient of 0.63 - deepens existing levels of poverty in South Africa, making it difficult for existing government policies and interventions to be effective,” she added.

In relation to levels of education, while the unemployment rate sat at 29.1% in the fourth quarter, at the same time, the number of people with less than a Grade 12 education increased to 34.6%.

The age category of between 15 and 24 years of age, had a 58.1% unemployment rate in the fourth quarter.

Maluleke highlighted that about 3.3-million, or 32%, out of 10.3-million young people – aged between 15 and 24 years – were not in employment, education or training during the quarter under review.

Nedbank in a statement after the release of the results said the figures were consistent with other indicators of real economic activity, which continued to reflect the lacklustre growth momentum in the South African economy.

The bank said the outlook for 2020 remained muted, with the considerable downside risks mainly emanating from the country’s highly fragile electricity supply and poor fiscal position.

"The weak growth outlook for South Africa suggested that any meaningful demand pressure on prices was unlikely to occur and therefore inflation was forecast to remain relatively benign.

"However, the consumer price index was expected to rise back to the midpoint of the target range over the next few months owing to base effects. This will make further interest rate easing psychologically more difficult, although still possible given subdued economic activity. We think that further easing will probably be delayed for an extended period," Nedbank stated.

SECTOR EMPLOYMENT
The formal sector recorded the largest employment increase of 117 000, followed by agriculture with an increase of 6 000.

Employment in the informal sector declined by 77 000 and remained unchanged in private households.

The increase of 45 000 in the number of people employed in the fourth quarter last year was mainly driven by community and social services, with 113 000, followed by finance with 76 000 and transport with 36 000 more people employed.

Declines in employment was recorded in the broader manufacturing sector, including its diverse metals and engineering (M&E) sector, with the sector losing 39 000 jobs during the fourth quarter of 2019, representing a 2.2% year-on-year deterioration.

"This was reassuring as it provided impetus for captains of industry to capitalize on and further increase employment opportunities in these sectors, with extended benefits for the M&E sector."

Kruger further noted that the persistent unemployment rate highlighted the need for continuous incentives to be provided to industrial sectors to boost production and sustainability, which should result in more employment.

“Continuous support for struggling businesses is crucial in these times of stagnant demand and poor business activity in order to reignite growth.

"Generally, a change of mindset is necessary to support existing top- down macro-economic initiatives aimed at reducing the high unemployment levels in order to deal with what is increasingly becoming an unemployment scourge," she said.

Kruger added that, for example, the unemployed could be encouraged by policy makers to seek for business opportunities, which could be expeditiously funded, rather than seeking jobs, as evidently the economy’s ability to create jobs is thinning, underpinned by poor demand and real capital spending.

First National Bank (FNB) noted its dismay particularly around the informal sector losing jobs. The bank said this sector outpaced the formal sector for three years up to the fourth quarter last year, which helped to keep employment above water.

FNB noted that this weakness in the informal sector could be attributed in part to civil riots and the police crackdown on illicit trade in the country's major cities in the second half of last year.

PwC highlighted its concern around the 159 000 jobs lost in the (wholesale and retail) trade sector, which usually sees an increase in jobs in the fourth quarter each year - considering increases in Black Friday and festive season staff.

The firm stated that, clearly, neither the Jobs Summit 13 months ago, nor the economic stimulus plan launched 17 months ago, had a real positive impact on the country's employment creation. "President Cyril Ramaphosa has a lot to answer for during the upcoming State of the Nation address later this week."