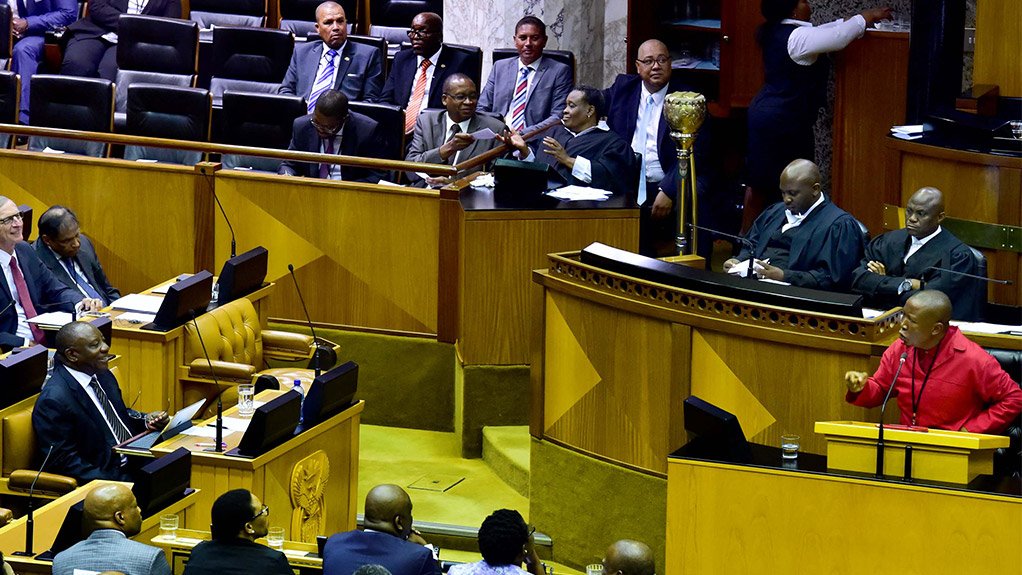 The Economic Freedom Fighters (EFF) said on Tuesday it had learnt of a plan to bring police into Parliament, disguised as members of the legislature's protection services, in response to its plan to prevent President Cyril Ramaphosa from delivering his State of the nation address (SoNA).

The EFF said it was unlawful to call the police into the legislature buildings as court rulings during the tenure of former president Jacob Zuma had shown, adding that it would stick to its plan to disrupt this week's event.

The party this weekend issued an ultimatum to Ramaphosa to fire public enterprises minister Pravin Gordhan or face chaos when Parliament opens on Thursday.

"The EFF further maintains that we will not allow the proceedings of SoNA to continue as long as Pravin Gordhan remains a minister. When Cyril Ramaphosa speaks, we will also speak," it said in a statement.

The country's second biggest opposition party said Parliament would lose face if it flouted its own rules, which held that only the protections services and sergeant-at-arms could remove members of parliament from the legislature.

It named the head of security at Parliament, Deon Van Der Spuy, as being involved in "secret meetings to co-ordinate a conspiracy to smuggle members of the South African Police Services inside parliament disguised as parliamentary protection officers to unleash violence on members of the EFF during the state of the nation address".

Parliament's spokesperson could not immediately be reached for comment.

The EFF further warned: "The arrogance to undermine the Constitutional Court and rules of Parliament so early in the term of the 6th Parliament to defend an indecisive and incompetent president will only collapse the proper functioning of Parliament."