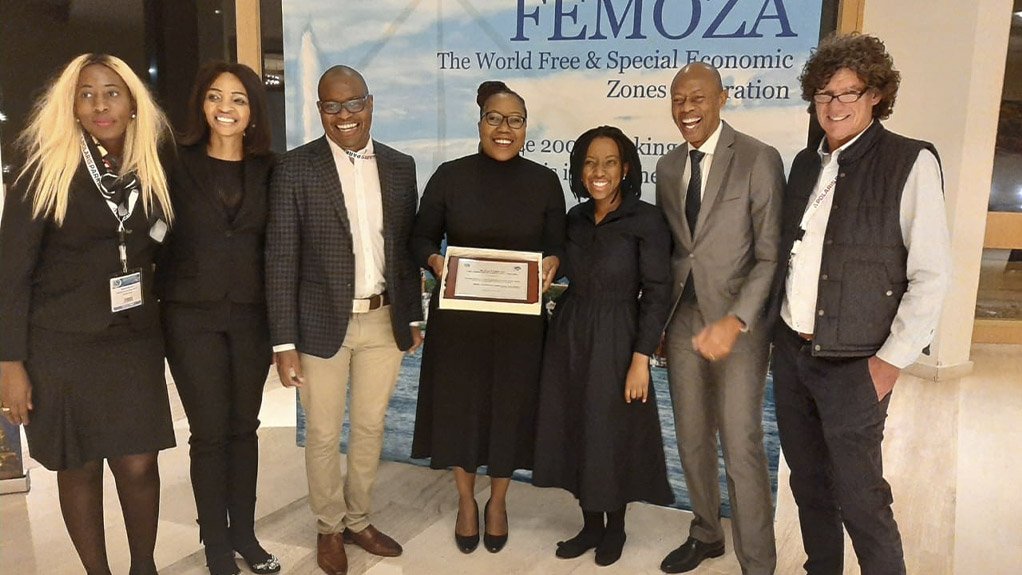 The announcement was made during The Su-Meet: World Free & Special Economic Zones Summit, taking place in the Principality of Monaco from 13 –15 November 2019.

The Su-Meet event is organised by FEMOZA in partnership with UNIDO - United Nations Industrial Development Organisation – and is the only world summit focusing on Free & Special Economic Zone models, best practices, successful case histories, challenges and future opportunities.  Dube TradePort Special Economic Zone COO Mr Kaya Ngqaka, together with board chairperson Dr Bridgette Gasa, have used the world summit to participate in a series of B2B and B2G meetings. The world summit provides a platform for global leading authorities in free and special economic zones to share their successes and experiences in trade zone development and best practices in attracting foreign direct investment to trade zones.

Congratulating Dube TradePort Special Economic Zone on this prestigious award, KwaZulu-Natal MEC for Economic Development, Tourism and Environmental Affairs, Nomusa Dube-Ncube said: “By and large, through the intervening years, we have seen the construction and completion of the Dube Cargo Terminal, Dube TradeZone, Dube City and Dube AgriZone infrastructure.  We are also steaming ahead with the establishment of cutting-edge technologies at Dube TradePort as inspired by the 4th Industrial Revolution.”

“To date, 43.588 tonnes of international cargo has passed through the Dube Cargo Terminal between April 2015 and December 2018.  The greenhouses at the Dube AgriZone are 100% occupied.  During the construction work at Dube TradePort, about 4.117 direct jobs were created with 21.330 indirect jobs also created for local communities”.

Dube-Ncube added: “We are excited about the fact that Dube TradePort is expanding through to the Second Phase and has attracted investments exceeding R12 billion. As we move towards the construction of the Durban Aerotropolis, we have strengthened the co-ordination with all spheres of government and neighbouring provinces. This will ensure seamless construction and completion of this strategic national asset which will benefit the whole nation and future generations.

“FEMOZA’s acknowledgement of the best-practice standards employed at the Dube TradePort Special Economic Zone bodes well for the critical role it has to play in contributing to South Africa’s investment drive – which was reiterated by our State President Cyril Ramaphosa at the second South African Investment Conference held early this month – to secure R1.2 trillion in new investment over five years,” Dube-Ncube concluded.

“FEMOZA’s recognition is in line with Dube TradePort’s vision of being recognised as the leading global manufacturing and air logistics platform in Southern Africa – if not the continent. Since becoming operational in 2010, Dube TradePort has been successful in attracting private sector investment collectively valued at more than R3.2 billion, bringing leading national and international business conglomerates to the precinct and creating in excess of 21.000 new job opportunities. We are confident that this global accolade will stimulate new investor interest and confidence in Dube TradePort Special Economic Zone’s highly competitive, business operating environment,” Gasa added.

Designed to enhance the country’s manufacturing and export capabilities and attract Foreign Direct Investment, Dube TradePort has become a world-class industrial and commercial precinct with a nurturing environment for businesses. Efficient infrastructure, seamless support services and a range of Special Economic Zone incentives, as well as market access to over 700 destinations around the globe through airlines that fly into Durban, create a unique, competitive advantage for businesses located within Dube TradePort.

Mr Hamish Erskine, Dube TradePort Special Economic Zone CEO, noted, “We are in the midst of an investment drive targeting private sector investments worth R18 billion over the next five years. This internationally acclaimed accolade of “Best Practice in Free and Special Economic Zones”, awarded to Dube TradePort serves to underscore the work we have done in putting in place infrastructure, support systems and personnel that put investments at the forefront of operations.”

“Since the beginning of 2019, when we announced the opening of phase 2 of our Dube TradeZone industrial precinct, we felt a tangible interest of optimism from investors; we hope that this award will further bolster that interest, bringing greater momentum of our investment drive.”

Despite tough market conditions, Dube TradePort Special Economic Zone has managed to maintain growth in tenants, investment interests and physical investments over the last 24 months.  The current pipeline of new investments gives a positive indication that growth will continue, especially in the electronics and pharmaceuticals within Dube TradePort over the next 18 months.

Issued by Assegai & Javelin on Behalf of: Dube TradePort Corporation